This story appeared in an issue of Homeworks magazine.

A Day at the Cottage by Carolyn Bateman 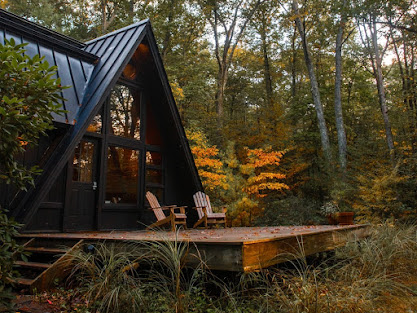 The day begins like this: sun sparkling on a dew-tinged lawn. Deer browsing within sight, elegant on attenuated legs. Breakfast in bed—toasted English muffins and homemade jam. Then to the garden to see what new flowers have bloomed. The day's responsibilities consist of a walk along a pebble-strewn beach, a glass of cold wine in the garden as the sun sinks slowly behind the ridge, and an early bed. Days that flow like golden honey from a silver spoon. Summer at the cottage.

The weekend home my husband and I own on Salt Spring Island is not what we in North America have come to associate with the word “cottage.” There is no lake or ocean within steps of a screened porch. No powerboats, no drying bathing suits on the deck railing, certainly no water skis. Crowds of family and friends do not descend upon us at the week’s end bearing gifts of turkey dogs and ice beer. In fact, this is a year-round refuge, a human-sized bolthole as embracing in summer as it is sheltering in winter.

I like to think our little wooden cottage in the forest is actually truer to the origins of the word, a word that has become so evocative for me that focusing on it can dispel depression. “Cottage" derives from the term “cottar,” a farm labourer during Britain’s agrarian feudalism, a way of life that had vanished like mist by the end of the 19th century. The cottage was the humble home of the cottar, a small abode, low to the ground and made of indigenous material in a vernacular style. It was a house that blended with its natural setting and was separated from it only by a garden and perhaps a low fence.

History probably indicates our North American nostalgia for that simpler time is largely misplaced. Just as the pre-Raphaelite ideal of Ruskin and Rossetti was a natural reaction to the Industrial Revolution, our longing for the bucolic life, before the microchip and the freeway, grows directly out of the coming of the Information Age. Tell it to Martha Stewart. Tell it to the book, magazine and clothing companies that sell the rural lifestyle like a commodity. We humans continue to have a long and established tradition of scrambling back to “the land,” in some cases only years after we’d worked so hard to leave it. “In a mere handful of generations,” wrote New Yorker columnist Brendan Gill in his 1978 book Summer Places, “men went from fearing solitude to seeking it. Having build cities as crowded and disease ridden as the ones they left behind in Europe, they cast about for the means of escaping them.”

The modern Canadian city may not be disease-ridden (as far as we know), but it is certainly more crowded than any 19th-century settler ever dreamed possible. So for those of us who find the tempo of modern life a little like being thrust into the spin cycle of a washing machine, the cottage as come to represent that simpler time when one’s days began and ended with the sun and exercise meant chopping wood or carrying water, not stepping on and off a machine like a treadmill dog. In the city, days are negotiated like pylons on a highway, dodging traffic, voicemails, impatient computers, deadlines. Think of the cottage as a kind of air bag. Hours, even days go by with nothing more accomplished than a book read, a bouquet of wildflowers picked and arranged, a meal prepared. A day without email is a day spent in sunshine—and worth the sometimes arduous task of getting to it.

Memories of sitting still: It is early summer and the grass is still green and lush. The sweet rocket is blooming and its light perfume hangs in the air like smoke. I lie in a lawnchair, my book forgotten, staring up to the sapphire sky. No clouds, no breeze, just the occasional loopy call of the pileated woodpecker and the somnambulant buzz of a tree frog. I try to close my eyes but cannot; the sky is too blue, too beckoning. I feel as if I have gathered its blueness into my soul. A raven passes over me high in the sky and I hear the whisper of feathers through air, silk on silk. Then only seconds later, an eagle, impossibly low and flying fast and straight, like an arrow from the bow, so close I can see his beady, intelligent eyes watching me. I laugh aloud at his hooked beak, his serious expression, the Charles de Gaulle of birds. A perfect cottage moment in a perfect cottage day, one I will carry with me until I die.
Carolyn Bateman is a writer, editor and communications consult who divides her time between Vancouver and Salt Spring Island.
Home
Subscribe to: Posts (Atom)
Return to Writing Samples page